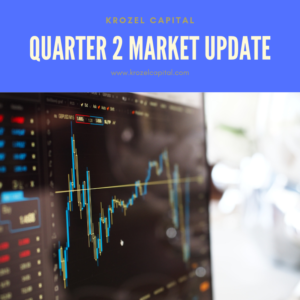 After a strong Quarter 1, US markets became more volatile in Quarter 2 as the old missive of “sell in May and go away” proved to be prescient this year with the S&P 500 peaking on May 1st.

The selloff throughout May ended as soon as June began and June experienced a strong rally that ended with the market just under its May 1st highs.

It’s important to point out that the last 18 months have seen substantial volatility without much upward progress in prices. At the end of the quarter, the S&P 500 is less than 2% above where it was in January 2018 (18 months earlier).

Developed international market indexes (primarily comprised of Europe and Japan) are down over 11% over the same time frame and emerging markets indexes are off over 15%.

China and the Federal Reserve

During this volatile time, there are two primary issues market participants care about as they think about the future prices of equities: The trade war with China and the actions of the Federal Reserve.

Let’s discuss both starting with the trade war.

At the beginning of May, talks between the US and China suddenly broke down when, apparently, China went back on some of the terms it had previously agreed to.

Irrespective of the breakdown in May, the two sides agreed to meet again at the G-20 Summit in late June.

Coming out of the meeting, it appears the talks were constructive, and in Trump’s words, the negotiations are “back on track.”

As concessions for both sides, the US administration decided to allow US companies to sell to Huawei and China decided to buy substantial amounts of goods from US farmers.
Despite the productive handshakes, there remains substantial points of contention within the negotiations and it is unlikely to be solved overnight.

What began as a “trade war” has morphed into a direct confrontation between the world’s incumbent superpower and the rising superpower.

We won’t get into each side’s beliefs but it is clear that we have a brewing battle between two different systems that will shape the world over the next generation.

There are also multiple incentives for President Trump to hold off on signing a new trade deal.

First is regarding his desire for lower interest rates, which could prolong the economic expansion.

This trade war has been the primary source of economic weakness around the world, which has led the Federal Reserve to do a dramatic about-face in the last six months, to move from raising rates to possibly lowering them during the July meeting. The Fed is unlikely to move to lower rates without the weak economic / inflation data to support it because it wants to appear independent of the executive branch.

Therefore, the President has some incentive to wait to create a resolution (as a resolution would likely lead to an uptick in economic indicators) until the Federal Reserve has lowered rates.

The other incentive is related to demonstrating a win to his base and getting the economy back on track just in time for the 2020 election.

The cost / benefit analysis of waiting is very tricky. Strike a deal too early and voters forget about what you’ve done. Strike it too late and the economy could be much less than robust heading into the election.

As James Carville coined as a campaign strategist for Bill Clinton in 1992: “It’s the economy, stupid.” Voters vote with their pocketbooks.

Therefore, waiting to sign a deal might end up working in President Trump’s favor whether he intended it or not.

One thing that has kept us bullish throughout the last few years despite continued calls by many strategists for global meltdowns is the fear we still see everywhere.

We’ve touched on this many times in these letters but the behavioral bias called the “recency bias” is incredibly strong and is definitely at work in the equity markets. Recency bias is when someone assumes what happened most recently will happen the next time.

For example, the next recession will be as bad as the last.  Real estate prices must be in a bubble and about to collapse.

We’ve talked many times about how this drives human behavior and it is interesting that it may also be impacting the Fed’s behavior. With unemployment at all-time lows, the Fed appears to be moving faster to ease based on low inflation / weak economic data than we have seen with Fed Boards in the past.

Back in October, Fed Chairman Jerome Powell commented that neutral rates (interest rate levels that are neither expansive nor a contraction on the economy) were at levels meaningfully higher than where they are now. Now, he and his fellow governors have been foreshadowing lower rates under the premise of needing to move swiftly to prolong the expansion.

While weakening economic data is concerning, if we get monetary stimulus in the way of lower rates coupled with a trade deal in the next 6-9 months that provides a boost to the economy, we believe we could be setting up for another leg higher.

Historical data also supports higher prices ahead, as the Fed prepares to lower rates in July for the first time this cycle. Over the past 100 years, whether the economy was in a recession (blue line) or not (red line), returns from the first rate cut over the next twelve months have averaged over 10%.

One specific area we’d like to address is the under-performance of international markets relative to US markets since the start of 2018.

First of all, it’s worth noting they outperformed relative to US markets in 2017, so it does go in cycles.

You can also see this by looking at the cyclically adjusted price to earnings ratios of the two markets, which started to decouple in 2010. Europe now trades at an ~50% discount to US stocks.

This is one reason we still like having international exposure. Explaining exactly why this
divergence has occurred is difficult but it is a mix of i) tech leading the way in the markets, which is more US-based, ii) ongoing trade confrontations, iii) stronger US growth relative to Europe.

While these issues are real, especially tech which should become more important over time, we believe it is highly likely international outperforms prospectively if only to come in-line with its historical relative relationship.

Markets gyrated during the quarter due to the breakdown of trade negotiations with China and more clarity around the change in Fed policy. After the G-20 meeting it appears trade talks are back on the table and the Fed is looking to lower rates at its July meeting.

While we don’t see the trade war being rectified overnight, a resolution later this year after the Fed has lowered rates multiple times could provide ongoing support to this market heading into the 2020 election.

Please feel free to reach out to discuss your investments or planning needs.

Disclaimer: The views and opinions expressed in this quarterly letter are those of Krozel Capital Management,
LLC and Fortis Financial Group (“the firm”), which is a wholly owned subsidiary of Fortis Holdings LLC.
Portions of this letter may contain certain statements relating to future results regarding companies we may
invest in which are forward-looking statements. These statements are not historical facts, but instead represent
only our belief regarding future events, many of which, by their nature, are inherently uncertain and outside of
our control. Such forward-looking statements are made pursuant to the Safe Harbor Provisions of the Private
Securities Litigation Reform Act of 1995.
KROZEL CAPITAL MANAGEMENT LLC WWW.KROZELCAPITAL.COM
Forward-looking statements are subject to market, operating and economic risks and uncertainties that may
cause our actual results in future periods to be materially different from any future performance suggested
herein. Factors that may cause such differences include, among others: increased competition, increased costs,
changes in general market conditions, changes in industry trends, changes in the regulatory environment,
changes in loan relationships or sources of financing, changes in management, and changes in information
systems and technology.
The firm will not publicly update or correct any forward-looking statements to reflect events or circumstances
that subsequently occur or of which we hereafter become aware.
This letter should not be considered an offering or solicitation to invest with the firm. Ideas and views expressed
within are not recommendations to buy or sell any securities. Past performance is not necessarily representative
of future results. The investment strategy of the firm is not designed to resemble returns generated by the S&P500
or any other index mentioned herein, and strategy volatility may be materially different from that of the indices.